The Marcus Soares Brazilian Jiu-Jitsu Academy offers the best training in Brazilian Jiu-Jitsu from beginners to professional MMA fighters, as well as law enforcement. At our Academies, students are family and friendship and trust is what we offer first and foremost. We always do our best to help our students reach their goals, whether it’s to get fit, learn Self-Defense, prepare for competition or to pursue a career in MMA or as a BJJ Competitor. Our philosophy is to make our students feel at home, get in shape, gain self-confidence, obtain discipline and create a new healthy lifestyle. We also prepare our students through pedagogical progression to feel comfortable in the uncomfortable positions in every aspect of an attack, standing, on the ground, with strikes, holds or a submission attempt; when you know BJJ, you will learn to always keep calm when faced with these kind of situations. People are afraid of what they don’t know and with knowledge of Brazilian Jiu-Jitsu, you will learn not to panic because you will be prepared with different forms of attack and pressure in your training. Brazilian Jiu-Jitsu is an art where leverage beats the strength and aggressive power of your opponent. BJJ was formulated from an almost scientific process of maneuvering, patience, flexibility, diet, strength of mind, strength of will and self-control.

We are led by Master Marcus Soares (Black Belt, 8th Degree), who was a direct student of Grand Master Carlson Gracie, he was part of the first generation of the Carlson Gracie team that was formed in 1970’s. Marcus was also a Professor at the Carlson Gracie Academy at the famous Copacabana School in Rio de Janeiro in Brasil. Carlson Gracie was the leader of a team that dominated the BJJ scene in Brasil for over 30 years, no other team in the history of Brazilian Jiu-Jitsu, let alone any other national sport has that kind of track record. In not only Marcus Soares opinion but many other respected Brazilian Jiu-Jitsu practitioners, feel Carlson Gracie should be awarded the trainer of the century, as he has created a legacy of notable names and is responsible for Brazilian Jiu-Jitsu to be taught to the general public outside of the family and on such an international level to gain the level of recognition BJJ has today.

Grand Master Carlson Gracie (August 13, 1932 – February 1, 2006), the greatest fighter in the history of Jiu-Jitsu. Carlson was the oldest son of Carlos Gracie (founder of Gracie Jiu-Jitsu), and learned the art of Brazilian Jiu-Jitsu through his father Carlos Gracie, and his uncle Helio Gracie. Carlson reigned for 30 years (‘50s, ‘60s, and ‘70s) in MMA with 18 vale-tudo (no holds barred) matches with only one controversial loss. Carlson wasn’t only a top competitor in Jiu-Jitsu and MMA, he also was one of the finest Jiu-Jitsu and MMA coaches to ever live. Carlson left the Gracie Academy in downtown Rio de Janeiro to open his own academy around 1968 and it was the most successful TEAM ever created in Jiu-Jitsu history, staying undefeated for over 30 years (‘70s, ‘80s, and ‘90s) 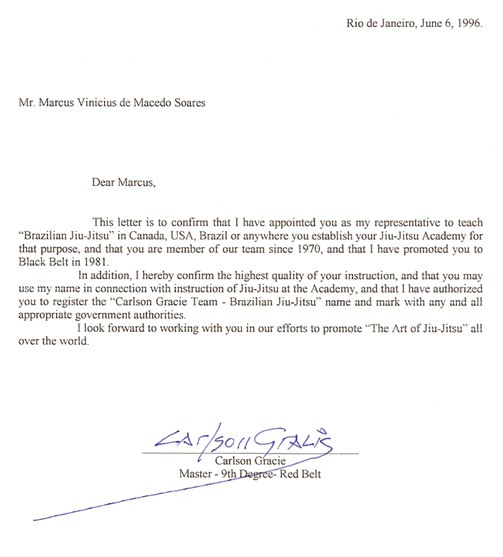