My Hero, Master Marcus Soares – An Essay by Ben Paquette

Benjamin Paquette, an eleven year old student to Scheer Martial Arts, owned by Troy Scheer. Troy Scheer, one of Master Marcus’ affiliates in Saskatoon, Canada. Benjamin was asked to write an essay about his hero, he decided to dedicate his essay to Marcus Soares. Benjamin visited our Yaletown school in Vancouver, BC during January 2019. Little did Marcus know the words he shared with Benjamin would be remembered and impact him and his BJJ world.

In his essay it was very clear to see the love Benjamin had expressed for Brazilian Jiu-Jitsu. Somethings he wrote about were his BJJ hero, the history of the Gracie’s and the influence The Legendary Carlson Gracie had on the growth of Jiu-Jitsu world wide. Of course, Marcus was truly honoured and touched to be held in such high regard by someone filled with such youth and enthusiasm, we welcome the new generation and looked forward to seeing more from Benjamin. Benjamin allowed us to share his words to our team, and here it is. 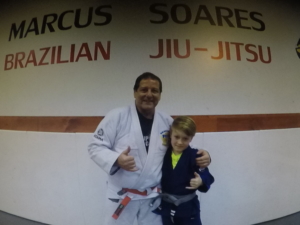 The grand master of many of Canada’s Brazilian Ju-Jitsu (BJJ) students and teachers is Marcus Soares. He is known as the “encyclopedia of BJJ”.  Marcus Soares grew up in Brazil and got his black belt from Carlson Gracie who he thinks of as the “son of Brazilian Ju-Jitsu”, and as he told me “the sun is brighter than anything”. Carlson Gracie was the eldest son of the creator of BJJ, Carlos, but ended up making his father very mad.  In 1997 he moved to Canada to teach.  He also owns three gyms in and around Vancouver where he lives.

Carlson Gracie was part of a very rich family and a family that founded and wanted to keep BJJ all too themselves.  We (those who do BJJ) have him to thank.  Carlson Gracie was the eldest son of the creator of BJJ, Carlos, but ended up making his father very mad. Carlson became the black sheep of the family, and by that I mean he was the original family member that allowed outsiders (from a Gracie) to do BJJ or at least teach them good technique.  This made his family extremely mad.  But because Carlson began teaching other people than Gracies it could no longer be considered Gracie Jiu-Jitsu. This when it became known as Brazilian Jiu-Jitsu as Carlson began opening schools of Carlson Gracies Brazilian Jiu-Jitsu. We have him to thank because without him Gracie’s would still be the only ones knowing BJJ.

A grand master in BJJ is the person that is the top living guy in the lineage.  Marcus Soares is a grand master in BJJ. Marcus’ lineage is the creator of BJJ, Carlos Gracie, followed by his son, Carlson Gracie, followed by Marcus Soares. Marcus Soares started BJJ at the age of 13 in a big city Rio De Janeiro, Brazil, South America among one of the many poor.  That did not stop him from learning BJJ because of dear friend Carlson Gracie, who at that time would be Marcus Soares’s grand master.  Carlson Gracie was the first that introduced Marcus to BJJ.  Carlson was also is the one to give him his black belt after seven years of training. Marcus Soares was one of Carlson’s top students and was one of the main competitors against the Helio’s side of the family and who ever walked in the door to fight. The Carlson side and the Helio side fought against each other because they thought they were the only ones worthy, and, of course as always in that family proof that they were better.

Marcus Soares is known as the encyclopedia of BJJ.  He is known as encyclopedia of BJJ because of the mass of knowledge he has on BJJ.  The knowledge is not just skills that he has learned through the years it is the differences between BJJ in the old days and now, or another example is the people he trained with.  One main thing I read about him going along with the differences in BJJ from the past and now is back then when he was young they went for more submissions than points (submissions are a way of breaking an opponent’s bones or they can be chokes).

Back in Vancouver, Canada Marcus Soares is trying to do what his sensei’s dream always was, to spread the great sport of BJJ around the world for all people to know. There were two ways to do this and they were by spreading the sport to people in other gyms and also by making your own gyms.  Marcus opened his first gym in the small place called Langley, and then later opened one in Vancouver around the airport and one last one in Maple Ridge (that is way number one to spread the sport of BJJ).  Marcus Soares has also become a grand master to many in Canada such as Troy Scheer from Saskatoon who has progressed to having a huge gym called Scheers (that is way Number two).  Troy is only one of 23 black belts given by Marcus Soares!  Marcus Soares is not done yet though he still is running his three very successful gyms and plans to give out many other black belts only if earned though.  I am sure Marcus Soares will continue teaching till death, like his sensei Carlson Gracie who died in 2006.

Meeting Marcus was one of the most amazing things for me.  When I met Marcus one on one he told me a bunch of really cool stories about Brazil, him, and the Gracie’s, it was like an interview.  One of the most funny but serious things he said to me after I asked him if he ever trained with Helio.  He said in a firm voice, “NO! They were our competition”.  This made more sense after I came back home and my sensei, Troy Scheer, told me that Carlson was the only one that taught people other than Gracie’s.  Another thing that Marcus told me, was about one of the most important people to him to him Carlson Gracie.  He said, “Not only was he a good fighter but a dear friend”.  Those are just a few of the things that made this extraordinary.

A final note from Ben’s father, Kevin Paquette, on the influence of BJJ and Ben’s coach, Master Marcus Soares’ affiliate and owner of Scheer Martial Arts in Saskatoon, Troy Scheer, on Ben’s life;

“I think training with Troy has had a big influence on Ben’s life. He was voted by his schoolmates as School President this year…I think the close connection of grappling creates different things for different kids. Whether it is friendships, focus, self-confidence, or leadership abilities…As far as BJJ, Ben has said he plans to be a blackbelt by the time he is 20.”

We all look forward to helping you with that goal, Ben!

BJJ may not be the first thing that comes to mind, but it has many benefits that can be applied to your daily life. Like

People all over the world deal with stress and anxiety. These problems can often be caused by issues with work or social life. When these

Are you unsure whether or not you want to enroll your children in BJJ? BJJ, short for Brazilian Jiu-Jitsu, is a martial art that requires

Have you ever sat down and wondered why you should learn BJJ (Brazilian Jiu-Jitsu)? Well, if you’re interested in martial arts for any reason, BJJ